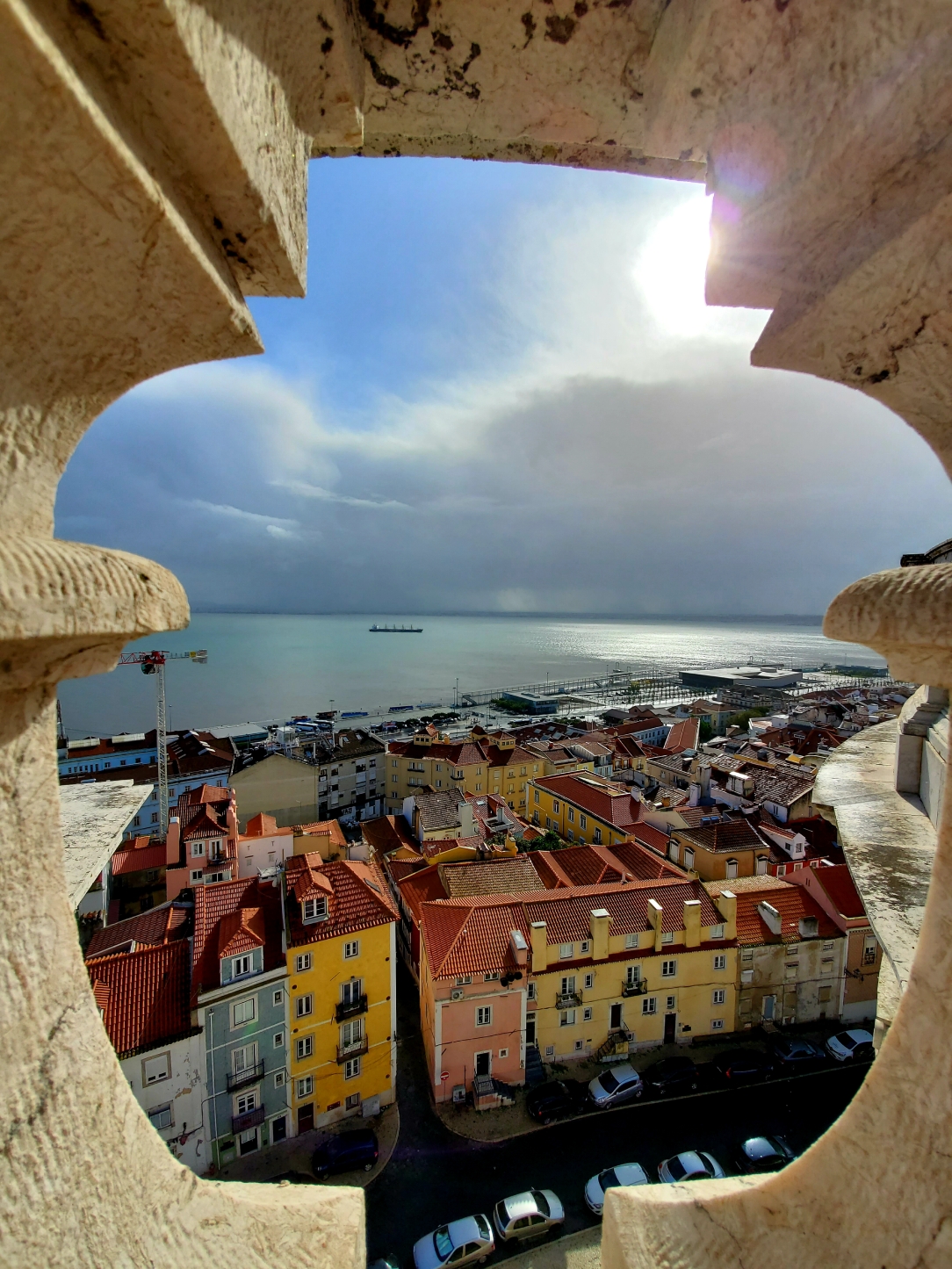 Day two in Lisbon I started to feel unwell.  (Catch day one here). You know, just that typical congested head, coughing kind of cold virus that everyone succumbs to in the fall and winter.  Not one to miss out on sightseeing, I headed out anyway.

Today’s plan was literally to get lost wandering the Alfama district. The Alfama is a maze of tiny little streets dotted with adorable homes covered in azulejos.  Tiny shops and restaurants are tucked into every corner and each time you take a turn, you feel compelled to take a photo of the cutest street you’ve ever seen. 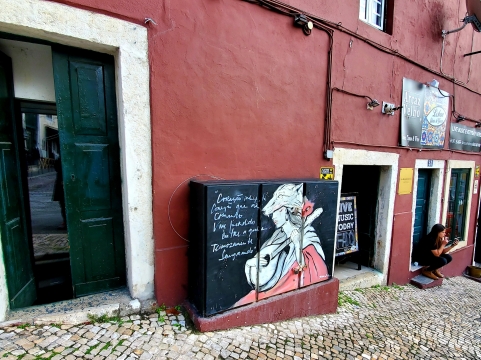 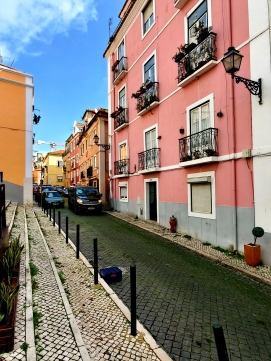 The Alfama is very hilly and you’ll get a killer leg workout in.  After hopping off the Metro, I started my ascent.  The Panteao Nacional or National Pantheon was first up on my list. If you’ve got a Lisboa Card, you can scan your card to get in.

You can see the massive white dome of the Pantheon from almost anywhere in the Alfama.  The church itself wasn’t inaugurated until 1966 after a series of troubles in construction. Inside you’ll be blown away by the use of different stone.  The church is laid out not in a typical Latin cross formation ,but in a Greek cross floor plan.

Also worth seeing here are the six cenotaphs of some of Portugal’s most notable sons and daughters and the pipe organ which was moved from the Lisbon Cathedral, the Sé, in the 1940s.

You can get a stunning view of the district from atop the Pantheon dome’s terrace.

From atop the Pantheon I could see the towers of what turned out to be the São Vicente da Fora. The monastery was founded in 1147 and was dedicated to Lisbon’s patron saint, Saint Vincent. The structure now houses a museum.

Entrance into the church is free but there is an entrance fee of 10€ for the museum. The contents are well worth the price as it contains several luxe pieces from the Catholic church as well as a close look at the architecture and tiles of the building.

Azulejo mosaics are prevalent in the cloisters. The bright blue and white tiles are in surprisingly good shape given the age of this structure. The details in each azulejo panel are fantastic. 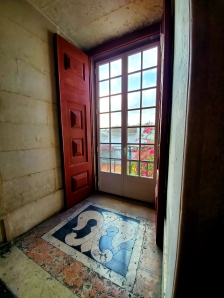 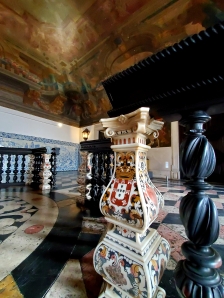 Down a corridor, you’ll also be able to view the old monks’ refectory.  The refectory became the pantheon for the Braganza family, the last rulers of Portugal.  The highlight of the pantheon is a breathtaking sculpture at the tomb of King Carlos and Prince Luis Filipe, his heir. Father and son were assassinated in 1908.

And, as with many of Lisbon’s monuments, don’t miss the spectacular city views from the top.

After visiting both churches, I spend some more time wandering the streets of the Alfama and discover the most adorable cafe tucked away.  You won’t really know about the shops or restaurants in the Alfama until you are literally upon them.

Rendevous was perfect for a snack of Portugal’s best meats and cheese and a glass of green wine. The Trip Advisor reviews tell you all you need to know about this charming restaurant.  The food and service were excellent. And we finished the meal with our first shot of ghinja, a sour cherry liqueur served in a chocolate shot glass. Nothing wrong with that.  You’ll find ghinja all over Lisbon.  A shot is about 1€.

We wandered more of the Alfama and of course, had another pastel de nata, this time at Santo António bakery near the Castel de São Jorge. (We missed the last admission to the Moorish castle by about 10 minutes). 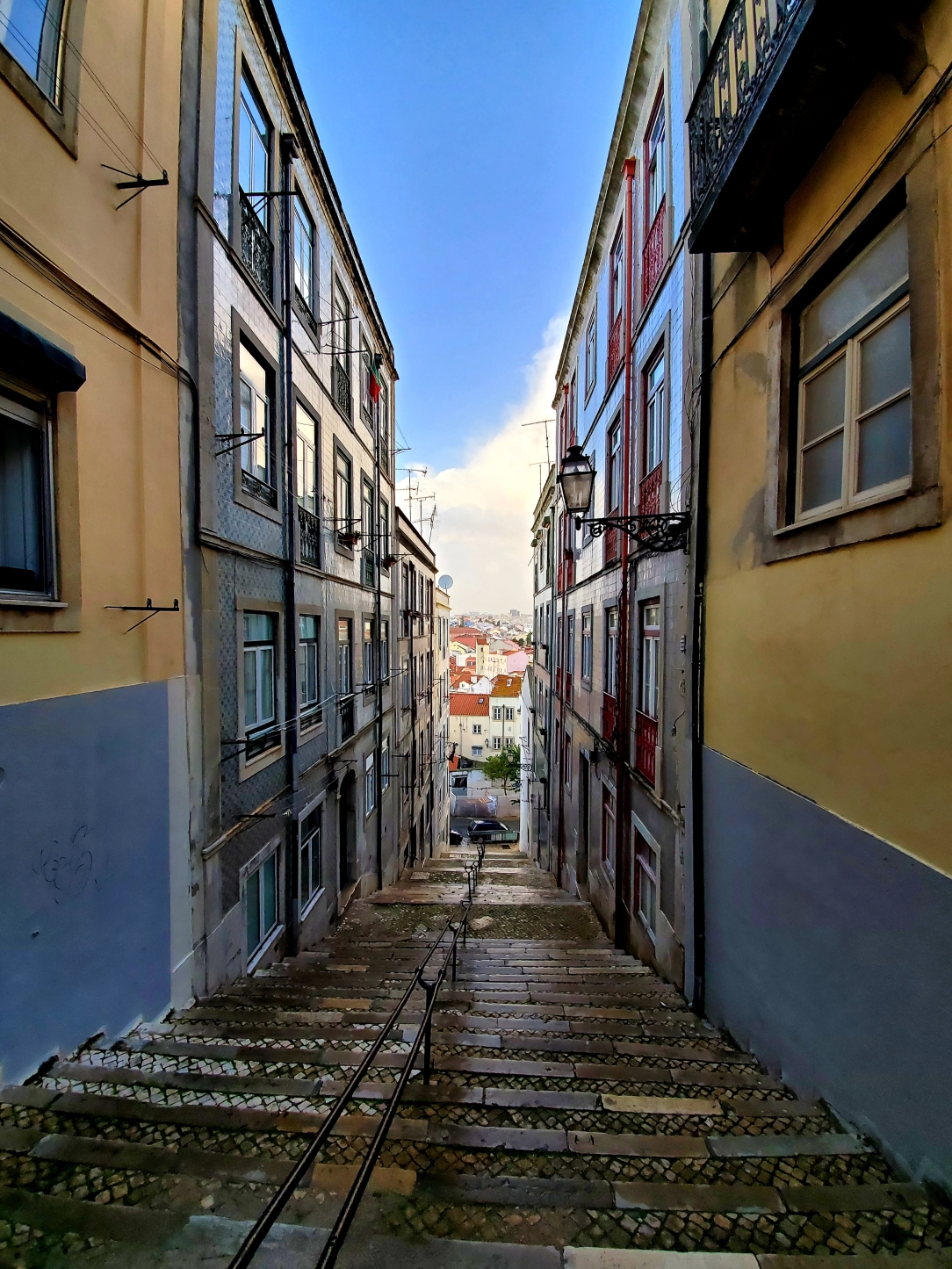 At this point in the day, I’m feeling worse, so I pop into a pharmacy.  Pharmacies in Lisbon are in every neighborhood and are almost like urgent care centers.  I talked with a very kind pharmacist who spoke brilliant English.  (I found that most people in Lisbon spoke perfect English.  They were also very patient as I mangled Portugese in an attempt to learn a bit.  If you can read French or Spanish, you’ll be able to read Portugese pretty well, but Portugese does not sound anything like its Romance language cousins for the most part.)  After describing my symptoms, the pharmacist whipped up two prescriptions for me.  (No antibiotics without a doctor’s prescription).  Back at the hotel, a take out meal of Ramen soup was on order.

Day three in Lisbon was a short one.  My friend left her room early and headed out to see the Castel de São Jorge while I slept off my latest dose of cough syrup. Around noon, I took the subway back to the historic center to meet my friend.  We hopped back on the tram heading to Belém.

First stop, lunch at Time Out Market. The Time Out Market is part traditional market with florists, fruits and vegetables stands, butchers and seafood vendors, but the other half is an extraordinary food hall featuring the city of Lisbon’s best dishes and drinks.

A curated food market, Time Out Market allows visitors to taste the dishes from Lisbon’s most amazing restaurants all in one sitting.  Simply order what you like from a mini-restaurant (or two, or three, or ten) and sit with your friends and new acquaintances at long open seating style tables.

It’s a fantastic place to try the food that makes Lisbon what it is.  We sampled everything from croquettes with goat cheese and carmelized onion to famous Portugese bacalhau à brás to garlic butter shrimp to steak sandwiches to chicken samosas.  Wash it all down with a glass of wine, beer or a cocktail. Everything is amazingly delicious. If it isn’t, it’s not allowed in the Time Out Market.  (We ate here several times).

Stop two, check out the Torre de Belém.  Not far from the other monuments, the Belém Tower was built from 1514-1520 as part of a defense system in the Tagus River. This is another UNESCO heritage site and is a stunning medieval tower standing tall in the water.  After its days defending the city, the tower became a lighthouse and even a customs center. In the tower, you can climb up the tower to view the inside, including a chapel and a gargoyle in the shape of a rhinoceros.  (The first rhino set foot in Portugal in 1513.)  A fee is required to enter the tower itself; or you can view the outside for free.  (Note that this monument, and many of Lisbon’s monuments, are closed on Mondays).

Day four is completely lost to much needed sleep, medication and more Ramen.  Several doses of cough medicine and hours of sleep later, I head out to visit Cascais and Sintra. Stay tuned!

Heather Pillman is a frequent traveler and a sometimes freelance writer, who wanted a forum to write about her travels and humorous misadventures. After encouragement from friends, she took the leap and started a blog about her travels. An avid hiker, nature lover and photographer, Heather is always looking for her next travel adventure. She believes fantastic travel is happening everywhere and loves to explore the sites in her own backyard and abroad. View all posts by missheatherlynnp

3 comments on “More of Lisbon”